WARNING: If you still can’t tell your blockchains from your cryptocurrencies, you’re in for one heck of a ride. 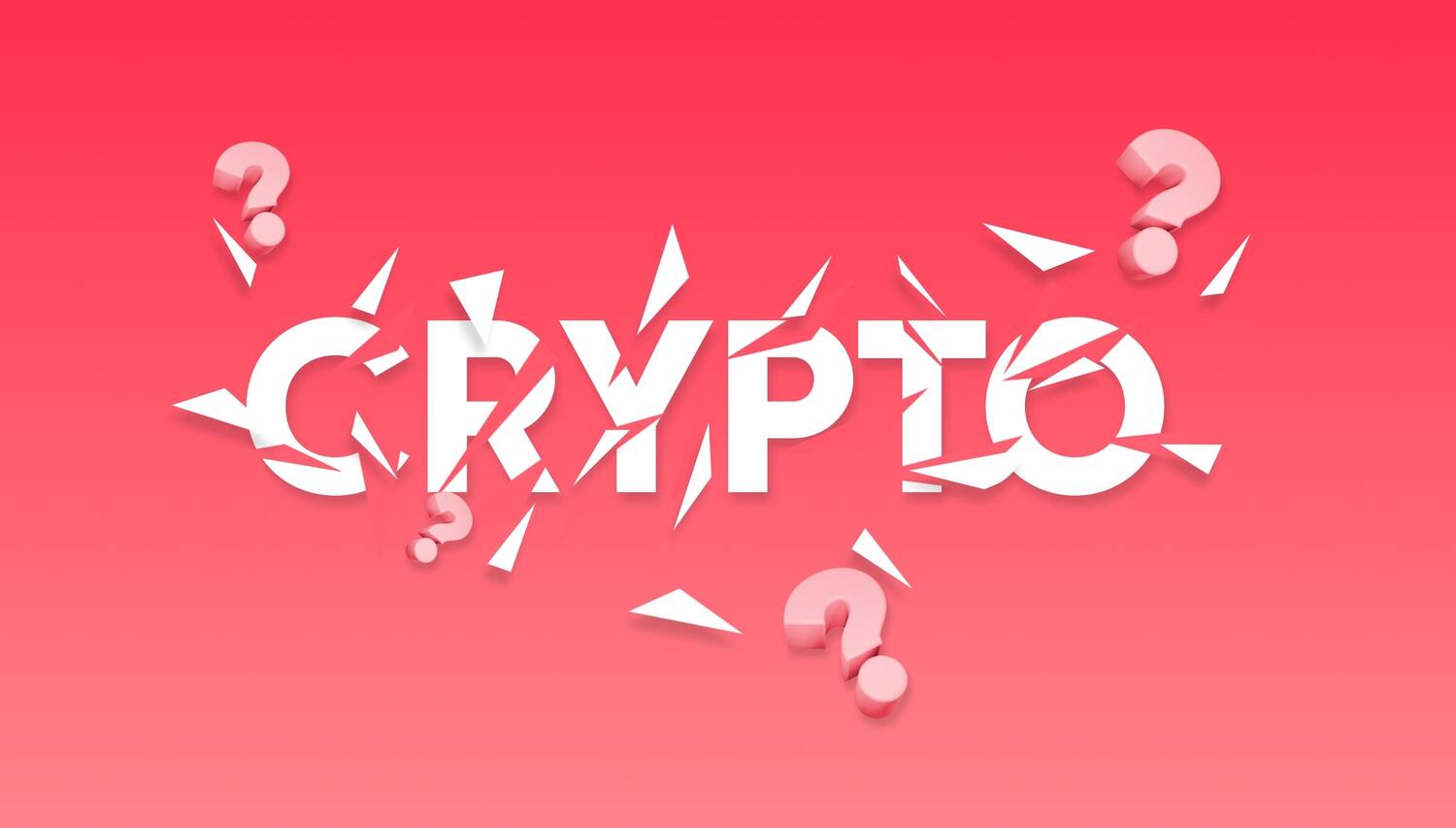 Crypto, Web3, and blockchain. The terms that fall under these three blanket categories can be the perfect recipe for a bit of a headache if offered without explanation, and unfortunately - more often than not they are.

That’s where we step in. We’ve cut the bull and put together our ultimate list of crypto terms and what they really mean - without the headache.

Learn the terms that are often used to refer to the underlying technology used to build the world of Web3.

In order to maintain decentralisation,  Web3 [link to web3] networks use ‘smart contracts’ to keep their ‘trustless’ systems running. To do this, they run on blockchain technology, which in short is much like a database formed by a sequence of entries rather than manual input from centralised individuals. Check out The Village Story for a really really brilliant breakdown of what this actually means.

To understand a simple analogy of decentralisation, think about your email address - it has no central governance. While you might use Gmail or another provider to read and send messages, if you decided not to use Gmail's platform to do this, you’d still have access to that email address and all of your historical emails.

DApps - or - decentralised apps are apps that run on a decentralised network, typically a blockchain. They run autonomously and offer a service to their users.

Much like in the offline world, governance is a system used to manage blockchains & implement change. Token holders of a certain currency will have the rights to vote when and where applicable.

Layer 0 blockchain is the foundation layer that gives different blockchain networks a platform to function. Polkadot is a well-known layer 0.

Layer 1 blockchains - otherwise known as ‘implementation layers’ - are where blockchain networks function. These live on top of layer 0s, and some popular ones are Bitcoin, Ethereum, and Solana.

Known as the ‘application layer’, layer 3s enable apps and DApps to run on the blockchain. In a sense, layer 3 tech hides the complexities of the blockchain to create a simplified interface for users - similar to how a website you’ll look at works, layer 3s are the blockchain apps you’ll interact with.

A public ledger in crypto works much like a public database. It’s a record-keeping system that enables transactions on the blockchain while maintaining decentralisation.

Mining is the process that proof-of-work-based cryptocurrencies, like Bitcoin, use to verify transactions on a network. Many computers globally work together in a decentralised way to verify & secure digital ledgers and record transactions made on a blockchain.

A node is a computer that connects to and serves a purpose for a cryptocurrency network - typically mining.

‘On-chain’ transactions refer to crypto transactions that have been completed entirely on the blockchain, verified by a public ledger.

Off-chain transactions occur outside of the blockchain. These depend on a third-party application for execution and require the transacting parties to enter an agreement.

Open-source software is technology built like an open book. Anyone can view the code used to build the software - it's publicly available for inspection. This concept has been around long before crypto - with Mozilla Firefox being an earlier example.

Relevant only to specific crypto networks (like Polkadot), parachains are layer-1 blockchains that run in parallel with the rest of their parent ecosystem. They share the entire ecosystem’s functions - like security, scalability and governance - and with the ecosystem’s cross-chain compatibility they can transfer almost any type of data between each other and connect to external networks.

Protocols in crypto are a simple set of rules that enable the sharing of information between computers & support a blockchain to function.

Think of this like Apple’s app store providing a platform for iOS apps - it’s a space on which software can be built, across the globe.

Think of a regular bank for a second. If more people began to use this bank for regular transactions & storing their funds, it’d likely have to increase its team size to ensure it could meet consumers’ expectations across things like processing times. Having no central governance means there’s no team to do this job, no matter how big the platform grows. This means the tech behind a platform must perform in such a way that it can scale according to adoption.

Smart contracts are contracts that work autonomously on a blockchain to execute terms of agreement in an exchange of information (or transaction) through code.

Through staking crypto tokens, users of a blockchain can verify transactions on the blockchain in exchange for rewards. See proof-of-stake for more.

A ‘bear market’ refers to a period of time when a market is experiencing continued price declines. A market will often be in a ‘bear’ state when buyers are selling due to economic factors.

‘Bull market’ is the term used to refer to a market condition when said market’s prices are rising or expected to rise.

Cryptocurrencies are digital currencies that exist on decentralised systems, like Bitcoin, Ethereum, Solana, and Polkadot.

A custodial wallet is a type of digital wallet where users can hold their cryptocurrency. Being custodial, the wallet is provided by a third party and has some elements of centralised governance through the ownership of the wallet’s ‘private keys’.

DeFi, or decentralised finance, is a financial ecosystem built on blockchain technology with the aim to run autonomously without the need for any intermediaries, banks or middlemen.

Much like non-digital assets, a digital asset is something that holds value and has established ownership. In the offline world, this can be anything from a currency, to a house, to a car. In the digital world, this spans across cryptocurrencies, NFTs, and a number of different digital-based assets.

A dip in crypto terms generally refers to a period in which a market value has dropped. ‘Buying the dip’ is a term often used to describe the purchasing of a cryptocurrency when the price is down, with the hopes that the price will go back up.

Fiat money is a form of currency that’s value isn’t determined by any commodity (such as gold). Often legal tender, many fiat currencies are typically declared as such by governing bodies, and therefore used as a form of money.

To hold your funds in trading means you’re not planning to sell - regardless of price activity.

Hodl is a term-turned-internet-meme meaning the same as hold, but used frequently among the crypto community since being coined accidentally via typo on a reddit thread.

KYC is a verification process used across financial services to verify the identity of customers and understand their financial profiles & risk vulnerability.

Market cap is short for market capitalisation, and refers to the total value of a market determined by the current price multiplied by the circulating supply.

A non-custodial wallet is a type of digital wallet where users can hold their cryptocurrency. Being non-custodial, the wallet is provided by a decentralised platform and all elements of the wallet are owned, managed, and controlled entirely by the wallet owner.

Peer-to-peer refers to a decentralised service, software, or platform that allows individuals to exchange data or transactions directly between one another without an intermediary.

A private key works similar to a password, and is a secret number used to identify ownership over blockchain addresses. It’s an integral part of blockchain technology as it supports the decentralised function of networks.

A public key is a cryptographic code assigned to a digital wallet that allows you to receive cryptocurrency transactions - similar to a bank account number.

A cryptocurrency that is designed to remain ‘stable’, often being pegged to a fiat currency or reserve assets to remain as such and avoid the typical volatility of the crypto market. USDC is a well-known stablecoin.

‘Stacking’ is a term used when referring to accumulating more of a particular crypto token.

Satoshis (sats) are the fractions Bitcoin can be broken up into - kind of like the penny to the pound, except there are 100 million sats in every one Bitcoin.

Tokens are units of value - or digital assets - built on a blockchain, like cryptocurrencies and NFTs.

Trading volume refers to the total value of trades made within a certain market spanning across a certain time frame.

A digital wallet is a wallet that exists primarily on a digital network and enables users to store their crypto holdings within it.

NFTs - or ‘non-fungible tokens’ are cryptographic assets built on a blockchain. They have metadata & identification codes that can be used to verify their authenticity.

Refer your friends & each get £10 in BTC when they buy £20 or more worth of BTC.
REFER A FRIEND

T&C’s apply. Redemption and withdrawal limits apply. Digital Assets are not UK-regulated. No FOS/FSCS on Cryptoasset-related services & products. Gains may attract Capital Gain Tax. Mode does not offer any financial or investment advice.

Fibermode Limited trading as Mode is a registered Cryptoasset firm with the UK Financial Conduct Authority, pursuant to the Money Laundering, Terrorist Financing and Transfer of Funds (Information on the Payer) Regulations 2017. Firm Reference Number: 928786.Greyfoxx Limited is an authorised and regulated firm with the UK Financial Conduct Authority under the Electronic Money Regulations 2011 for the issuing of electronic money and payment instruments. Firm Reference Number: 901025. Mode Global Holdings PLC is a public limited company incorporated and registered under the laws of England and Wales with company number 12794676.

How was Bitcoin created?