Why does Bitcoin’s price change?

Bitcoin’s price can be volatile - which makes the idea of getting into the space a little overwhelming for some. But why does its price change so much, and is it still worth backing? 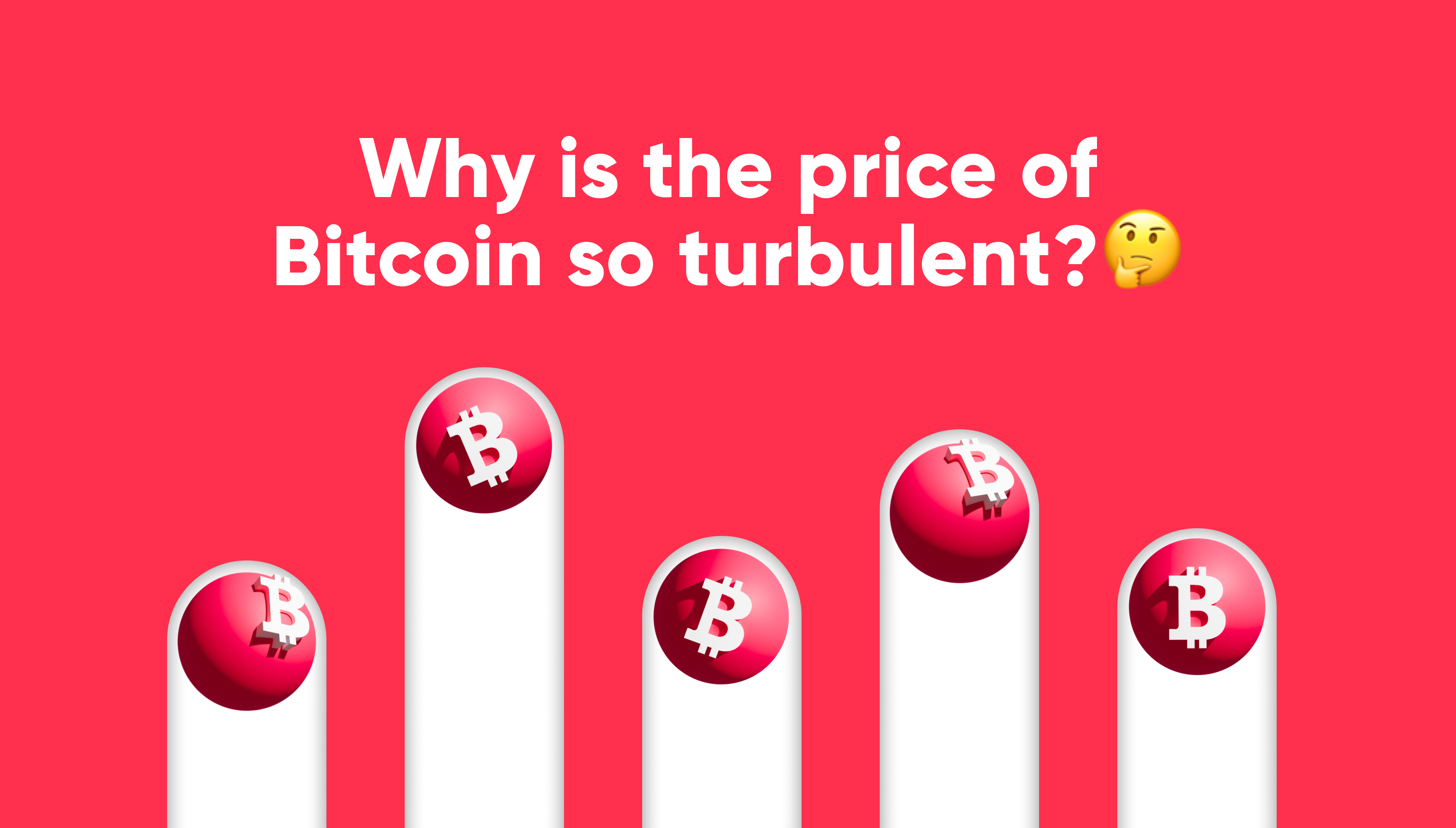 There’s been a lot going on around crypto over the past couple of weeks, and for anyone who’s new to the space, it can feel pretty daunting.

To ensure you feel up-to-speed with what’s going on, we’ve focused our efforts on putting together a little explainer that we hope might support our ever-expanding Mode community to understand what’s going on in the market.

So, why does Bitcoin’s price change?

There are a few reasons Bitcoin's price fluctuates as it does, but when asking the question why does its price change - period - there’s one answer:

Like any asset class, stock, share, or even currency (yep - the pound coins you’ve got randomly dotted around the house too), Bitcoin’s price fluctuates when compared in value to another currency.

Traditional currencies like the pound or the dollar can feel like they stay ‘the same’ in value if you’re not used to owning, using, or trading in other currencies - but their value fluctuates too.

The reason their value seems pretty stable is down to a number of things, like public trust, economic dependency, and liquidity - but ‘traditional’ currencies have been known to decrease and change in value dramatically too - like Venezuela’s Bolivar.

The question we really need to answer here, is why does Bitcoin’s price seem pretty volatile at times?

Although it may seem complex, the answer to this question is pretty simple.

For the most part, Bitcoin’s price fluctuates so much is that it’s still pretty young. Since the entire crypto asset class and Bitcoin itself haven’t even surpassed 20 years of existence yet, Bitcoin’s youth means it's still carving out its position in the global economy.

As an asset that holds its value on the basis of trust, supply and demand and economic value, (much like the pound) - being young means that Bitcoin buyers aren’t entirely certain as to how they view its future - meaning external interferences like news headlines, influential tweets (hey Elon 👋), and governmental practices can have an effect on people’s decisions to buy or sell some of their own Bitcoin.

This, in turn, can make Bitcoin’s price catapult upwards and jump straight back down a little more frequently and dramatically than traditional currencies like the pound.

So why do people still get involved?

You wouldn’t be blamed for feeling uncertain about deciding to own any asset or currency that could gain or lose value quickly - especially if you’re new to the game, or you’ve a humble net worth.

We try to be as transparent as possible in all of our practices, and when it comes to Bitcoin we don’t downplay the risks. It’s not regulated, and its price could theoretically head to zero. So why do we (along with millions of people globally, including the UK Government) believe in it so much?

Well, to put it simply: we believe Bitcoin has intrinsic value, and we believe in the longevity of its future.

Many Bitcoiners compare Bitcoin to Gold (Even one of the biggest banks in the world made the comparison), and many consider it to be a contender as the world’s future reserve currency. Why? Because they believe it’s a great store of value.

Bitcoin was born out of the tail end of an economic crash, with the notion to build a decentralised financial system that creates a fair and just economic landscape for everyone - taking financial power away from centralised institutes and handing it back to individuals. It was developed in a world that was quickly shifting towards a digital era, on frameworks that are still well advanced almost two decades on.

As a digital asset, Bitcoin offers the potential for a borderless currency that can resist inflation, and financially connect individuals and institutes across the globe. The design applied to Bitcoin gave it something unique from the currencies we’re most familiar with today: it has a finite supply. Similar to gold (and the pound when the Gold Standard backed it), there’s a limited amount of Bitcoin that can and will ever exist in the world. In short: that means its value against itself will always, in theory, hold true (unlike the pound or dollar, which can be physically printed to produce more and more of its kind, and in turn grow the national currency deficit)

There are a number of reasons people believe in Bitcoin, but for the most part - they believe the digital asset is just starting out, so the dips and turns we frequently see are small steps along a much bigger journey.

Just this week, experts are suggesting the cryptocurrency could hit $100,000 in value this year, so in the grand scheme - for anyone who’s been in the game for a little time, a dip or two likely won’t turn them grey.

Side note: There are still risks, and each time Bitcoin dips, any capital investment could be lost. Equally, this article is exclusively about Bitcoin and does not reflect on other market activity.

Can you get involved without exposing your money to the risk?

DW - that’s not all, we’ll elaborate. There are a number of secure ways to start growing a Bitcoin portfolio without having to spend your own funds on purchasing Bitcoin directly, and this is exactly what drove us to build our Bitcoin Cashback product.

With our in-app Bitcoin Cashback, you can use Mode to earn Bitcoin without spending a penny on purchasing the digital asset by shopping at everyday UK stores and earning Bitcoin when you make a purchase.

We’ve got 100+ top stores like The Body Shop, FARFETCH, Decathlon, and Trip.com that offer varied amounts of Bitcoin as a cashback reward when you shop at their stores. As long as you have a Mode account and shop with the brand directly from within the Mode app, you’ll receive your Bitcoin automatically into your Mode account - meaning each time you shop, you’re growing your Bitcoin wallet more and more.

If you’re not sure about buying Bitcoin for whatever reason but you’re keen to start owning some, using products like Bitcoin Cashback can be a way to start. Since the app is free to download and you can use our cashback feature without a fee too, you’ll only be spending money on the goods that you’re buying with the stores that you love. Win-win, right?

Are there other ways people try to avoid the risk?

Absolutely. As with any investment or purchase that can be considered ‘risky’, there are always individuals who will try to counteract the risk while still putting a sum of their funds into it.

Some of these ways are worth avoiding as the routes themselves can be considered risky, but some - while not claiming to eradicate risk exposure - are considered by many as pretty reputable methods to at least soften your own direct risk exposure. These are known by most as ‘investment strategies’. One investment strategy we’ve touched on in the past for this is Dollar-Cost-Averaging which suggests those who follow it buy a little bit of Bitcoin periodically regardless of price activity in the market.

As we’re not financial advisors, we’ll leave you to take a look into what works for you best, but we’d always suggest you do your own extensive research.

At Mode, we’re firm believers in the future of crypto, but we’re also believers that you should do things at your own pace when you’re ready and comfortable to do so.

Have a look at our list of Bitcoin Cashback brands in-app to earn up to 50% in Bitcoin back when you make a purchase.

Until next time Bitcoiners,

Withdrawal limits apply. Mode aims to ensure offers are current. Offers are set by the merchant. T&Cs apply. Bitcoin is not regulated; it can go up/down/drop to zero. No FSCS/FOS protection. CGT may apply. 18+ UK only. Read more: modeapp.com/protection. Fibermode t/a Mode is FCA registered as a Cryptoasset firm (FCA 928786). We do not offer financial advice. Past performance does not indicate future performance. Views are our own.

How we safely store your Bitcoin

🤟 Introducing Bitcoin Cashback – What it is and why we love it